State of the Art Oil and Grease Removal Units 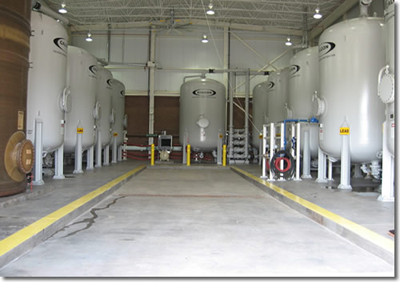 In addition to higher surge volumes during busy periods, and generally-higher temperatures, restaurant wastewater is typically higher in strength than residential wastewater. This is due to higher levels of oil, grease and foods which cause a higher biochemical oxygen demand (BOD). Oil and grease frequently cause problems for both on site sewage disposal systems and public sewer systems. The problem occurs when oil and grease liquefy at the high water temperatures used to wash dishes and later solidify in sewer lines or sensitive soil interfaces in the leaching facilities of onsite systems. The problem is exacerbated when highly efficient detergents are used to emulsify the oil and grease, keeping them in suspension until they enter the leaching field. Although conventional grease traps are supposed to prevent grease from entering the septic tank or sewer line, high grease loads, emulsified grease, and surge wastewater loadings often cause grease to bypass the grease trap and enter the leach field. When grease reaches the soil absorption system it can physically clog the soil pores preventing both water infiltration and the free transfer of oxygen necessary to digest waste. The high BOD present in grease also promotes excessive bacterial growth which causes the formation of a thick anaerobic biomat that has less ability to actually treat the waste. The result is premature failure of the soil absorption system. Data suggests that if soil absorption systems at restaurants are to function in the long term, design modifications must be made which take into account the much higher wastewater strength, flow variations, and oil and grease constituents found in restaurant wastewater.