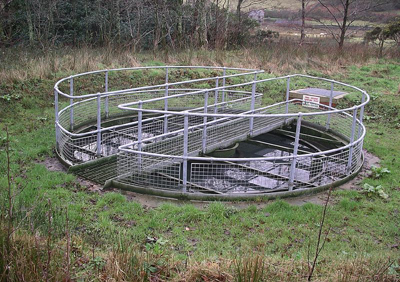 Primary treatment includes: filtering out large objects like cotton buds, rags and other rubbish, using fine screens aerating the sewage to remove finer particles like grit and sand sedimentation, where heavy items sink to the bottom forming a layer called sludge â the settled sludge and floating debris is pumped to larger tanks, known as digesters, where it is broken down by bacteria In Secondary treatment, different types of bacteria exist side by side in aerobic (with oxygen) and anoxic (without oxygen) environments, breaking down organic material and removing nutrients in the plant's aeration tanks. The water then passes through sedimentation tanks where more sludge settles to the bottom to finally produce clear treated water at the top, also known as secondary effluent. The treated secondary effluent flows to large holding ponds before it enters the tertiary treatment stage of the plant. Tertiary treatment The treated water is then recycled or discharged to the marine environment at Boags Rocks, under strict EPA Victoria licence requirements. 1. The tertiary supply pump lifts effluent from the secondary stage out of holding basins, whereupon it enters the advanced tertiary treatment plant. 2. Ozone is added for disinfection, to reduce colour and odour, and to optimise the rest of the treatment process. 3. Biological filters containing helpful bacteria biodegrade the organic matter and reduce ammonia, oil and grease, foam, litter and solids. 4. More disinfection using ozone, which is generated on-site from oxygen. 5. Exposure to ultraviolet light for further disinfection. 6. Treated water enters two large chlorine contact basins, where chlorine is added as part of the disinfection process. The basins also feed the treated water to the outfall pump station. 7. Tertiary treated water is transferred to the outfall pump station where some is recycled. The remainder is discharged to the ocean under strict EPA Victoria licence requirements.